Teaching our Children to Let Go

Last year, I was working with a client to clean out her home in preparation for the holidays. In particular, she wanted to focus on decluttering and organizing the kid’s playroom, since her mama x-ray abilities predicted the number of toys and games that were soon to take over the space. We came in armed with donation bags, trash bags and post-its galore, and got to work. 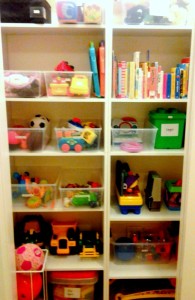 Within about five minutes, her two daughters appeared in the doorway, looking concerned for the welfare of their toys. “Mommy, what are you doing??” cried one of them in alarm, her pink footie pajamas looking crinkled.

I thought…uh oh, here goes. The dreaded what-no-you-can’t-throw-that-out-its-my-favorite fill-in-the-blank-thing ever!! (Never mind that the item in question hasn’t been seen, touched or played with in eons.)

I won’t lie, I expected a different outcome than what did happen.

Their kind, loving mother got down on her knees on the floor with her children, and told them that she knew it was hard to get rid of their toys, but that there were other children in the world who didn’t have any toys. She went on to explain how important it was to pass on things that we don’t use anymore so that other kids can enjoy them, and that’s how we make room for new things to come into our lives.

Yes, this lesson was directed at children, but in fact it applies to us all. How many of us hang onto items that we don’t use, think about or even know we have – in the event that, at some point, it might become useful? We are paying for those items, the cost of storing them, the energy of looking through them every six months or so and not taking action on them. Then add insult to injury with the fact that someone else out there can use those items today, but they won’t – because they’re sitting in our garages, collecting dust.

In preparation for holiday giving and receiving, it pays in spades to eliminate those items that you are not using, and to make room for the new. The added bonus is a decluttered home!

And the girls? Once they understood that their toys would be going to other kids who didn’t have any themselves, they jumped right in. They managed to purge all of the “younger” kid’s toys that they had outgrown, and even got rid of some favorite toys that they had just become bored with. At the end of the day, they had an organized playroom with even more space to play and I have a hunch that, this Christmas, they will enjoy their gifts even more than ever.