Like most people, you’ve probably heard of the organizing method called Swedish Death Cleaning. This idea is nothing new, but it was popularized by Margareta Magnusson in her forthright and incidentally hilarious book, The Gentle Art of Swedish Death Cleaning: How to Free Yourself and Your Family From a Lifetime of Clutter.

Since it’s publication in 2018, this method has been vastly adapted around the world by many people. Yet the idea is also commonly misunderstood, based on it’s macabre name. After all, getting organized can be challenging enough without throwing the word “death” into the process! Yikes.

So What IS Swedish Death Cleaning?

Simply put, the Swedish word döstädning refers to the decluttering and cleaning you do when your life is nearing its end. The modern version adapts the process so that you can “death clean” at any age or stage of life.

This method takes on the larger picture of WHY we keep things. One big reason is because we are afraid that someone will want an item someday. Rather than waiting for your death for them to discover these “gifts” (which may not occur for a VERY long time), the goal is to find out now. If they don’t currently want it, they’re probably not going to want it when you’re dead!

This is not so much an exercise in literally planning for your death, but in framing your choices around that eventual future time. It is about being organized, communicating what you have to others, and being intentional in how you store things.

How is Swedish Death Cleaning Different From Marie Kondo’s Life Changing Magic of Tidying Up? 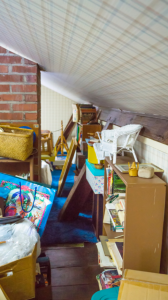 Does your home need to be death cleaned?

The answer is that, while Kondo teaches her followers to focus only on what gives us joy right now, Swedish Death Cleaning teaches us to think about the future, specifically how people will view our stuff – and whether they will want it – when we have passed. One benefit to this kind of framing is that it acts as a big motivator to do real decluttering: not based on whether it makes us happy, but whether it is actually worth keeping – for any reason.

That said, Swedish death cleaning does end up being similar to Marie Kondo’s method laid out in her book (you can read our review of Kondo’s book here), in that we usually end up getting rid of A LOT of stuff! The end result is the same, but the way we get there is different. This matters because the methodology MUST make sense to you and feel meaningful, otherwise you won’t get anywhere with your home organization efforts.

There are many ways to get organized – whether you use a process laid out in a book, hire a professional organizer or simply wing it yourself. Death cleaning has it’s own benefits that will really resonate for certain people, and not necessarily for others. We believe in supplying our clients with methods that work for them, so it is definitely worth looking into the method if you think it may help you. Here are the Cliffnotes version on how to Death Clean.

Death Cleaning does not need to be done all at once. Take your time and go through an area when you have an available window in your schedule.

Start with storage spaces like closets, basements and attics if you are death cleaning in the entire home. There are often many items there that we have forgotten about and are easily discardable.

Put photos, letters and mementoes aside to do last. It’s easy to go down a rabbit hole remembering times past, and can become emotional. Doing it all at once can help us prepare by having someone sit beside us, or simply be mentally ready for the task. 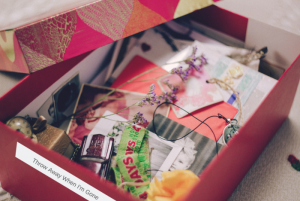 Create a “Throw Away” box, filled with the mementoes that mean something only to you. Write on the outside of the box that it is private to you, and that you family has permission to throw it away after you’re gone. This separates those items and will simplify the process once you are gone. This is also a good storage category in general!

Don’t assume people are going to want things: ask them first! Take a picture and send it in a text. If they say no, let it go. As stated above, if they don’t want it now, they probably won’t want it later.

If you know what you’d like to be done with certain belongings after you die, tell someone or leave a note. This may relate to historical family documents, something that could belong in a museum, or something to return to someone else.

Even if decluttering proves challenging, there’s a lot to learn from Swedish death cleaning. You will learn about some of your patterns when it comes to keeping things, and likely curb your choices about what you keep going forward. You’ll also be able to distinguish more easily between the items you have a true connection with, and what is simply clutter. Sometimes, it takes a little excursion into a predicted future to truly determine the difference.