If you follow the Organizers NW blog, you know that I’m a fan of being totally honest when it comes to living the life of a professional organizer. Contrary to what you might think, we are real humans who learned this trade through lots of study and training, with a good measure of trial and error thrown in along the way. This is how we are able to really connect and help people – by keeping it real.

In the spirit of keeping it real, I’d like to share a little of my past relationship with (queue shark attack music): task lists.

Here it is. I hated them.

I knew that it made sense to keep a task list, but I rejected the idea of being a slave to a piece of paper. Creativity and the freedom to change course dominated my days, and I wasn’t tethered to some rigid expectations for myself. I was a free spirit! I was young and footloose!

In short, I was achieving nothing.

That’s not true. I watched the entire series of Mad Men, and also True Blood. My apartment was meticulously clean. I went to work each day and earned a paycheck (this was prior to becoming an organizer). I thought about things that I wanted to do, but didn’t do them. My home was as organized as Marie Kondo’s underwear drawer, but my productivity was nonexistent, along with my so-called creativity.

In my experience, not having a task list can produce two different variations of unease: for busy professionals and / or parents, it feels like you’ve got twelve balls in the air and are constantly terrified about which one is going to drop first. For those with fewer responsibilities, it feels like you could be doing more with your life, but aren’t sure how to begin. In 2011, I was suffering from the latter malady.

In 2012, I met Missy Gerber and joined the team at Organizers Northwest. (You can learn more about that journey in this article about the 5 Myths About the Professional Organizing Industry.) 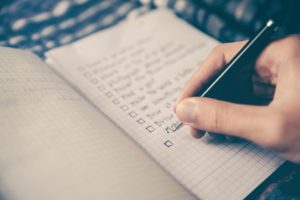 I began attending NAPO Oregon chapter meetings and participated in organizing and productivity trainings. If you know Missy, you know that she is a huge advocate for learning, making mistakes (“fail faster” she always says), getting up and brushing yourself off, and applying your new knowledge. Task lists are a high priority at the Organizers NW office, and the expectation was (and still is) that we would be committed to using one.

Almost unaware, I was swept into the world of writing things down and getting them out of my head. Planning. Prioritizing. Setting bigger and better goals. It was magical. I finally had direction.

What Planners Have I Used?

Over the years, there have been many iterations of my task list. “My three things” was a popular one, where you had to write down three things that you planned to do the next day. The philosophy is that keeping your list to a small and manageable number of items would assure the likelihood of getting them done. And it worked! But it wasn’t robust enough for me – I need to be able to write EVERYTHING down. I was a woman obsessed.

Next, I moved to a spiral notebook where I wrote down all tasks for the week, then crossed them off as I completed them. At the end of the week, I started a fresh list. Whatever did not get done would be re-written in the new week. The beauty of this method was that re-writing the thing that I failed to do, over and over, forced me to question why I wasn’t doing it. Often the task needed to be broken down into smaller, more manageable chunks, or I needed to ask for help or delegate part of it.

A Kanban Board is a great way to process through a project, or just to keep all of your tasks handy. A Kanban board is a project management tool designed to help visualize work, limit work-in-progress, and maximize efficiency. We sometimes help our 5S Office Organizing Clients to implement them. I’ve done small, portable versions of this using sticky notes on the inside of a manila file folder, as well as large versions using painters tape on a blank wall.

There was a brief but fleeting affair with a bullet journal, which lasted about a month. This didn’t work for me because OH SNAP, I was so productive and busy at this point that I didn’t have enough time to make the journal look pretty, which frustrated me. It is possible to create a completely utilitarian bullet journal, but it still requires the use of a really specific formula which felt a little claustrophobic to me. Power to the bullet journalers out there – I wish I had the drive to put into this type of list every day.

I currently use the Seeing My Time Adult Planner from Executive Functioning Success. This planner system has clear vinyl pockets and tear-off day, week and project pads that you place in the front to keep your task list front of mind. It works well for me because it helps me keep all of my projects, goals and to-do items visible.

Not sure what format to use for your task list? Don’t over-think it. A good old notebook with room to write things down is good enough. If you want to start fresh with a new format, think first about what you want your task list to do for you. Is it a place to brain dump? Do you want to stick to specific goals each week? Keeping your end goals in mind will help you choose the right one.

We’ve created a simple to do list chart to help you get started. You can download, print and get going right away.